Cost of studying in Netherlands 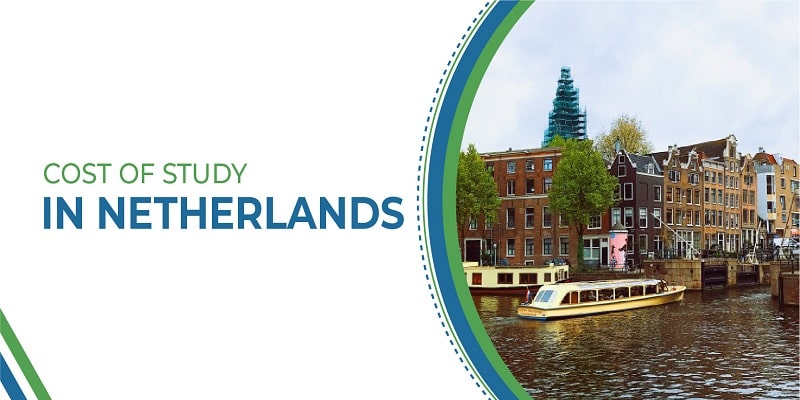 Netherlands is well known for its technical, scientific, engineering, and research-oriented courses. Indian students can take up graduate, post-graduate, or doctorate-level degree courses. There are 5 Universities in Netherlands that feature among the world's top universities as per the latest QS Rankings:

There are around 85 universities in Netherlands which offer top-class infrastructure, an excellent student culture, and highly qualified professors from all over the world. The number of international students has phenomenally risen in the last ten years, thanks to excellent academic programs and a pleasingly tolerant culture that welcomes students coming to study in the Netherlands.

Tuition fees change depending on whether or not you are from a country within the European Union. For Indian students, the fees they are expected to pay range from Rs 600,000 to 1,60,00,00 as annual tuition.

There are thirteen Dutch Universities in the top two-hundred universities in the world according to the QS Ranking. Most offer scholarships, accommodation, and a plethora of undergraduate, Master and doctorate programs in Dutch as well as English.  However, the three most popular are listed below.

Study in Netherlands for Free

Scholarships in the Netherlands:

Along with excellent infrastructure and world-class teaching faculty, some best universities in Netherlands also provide scholarships. There are various scholarships for different categories of students such as their countries of origin, economic status, and academic qualifications. Indian students who wish to study abroad in the countries in the EU can opt for the Erasmus Mundus scholarships which include the Netherlands.

There are two kinds of financial aid provided to students apart from scholarships in Netherlands. Grants and Student Loans for foreign students. The grants are provided by the government of Netherlands. The applicant must be under 30 years of age, enrolled in a Dutch University, and have a Dutch bank account. The non-Dutch students must have a legal permit to apply for the grant. A candidate is not provided more than €13000 in a year.

It is easier to get a Student Loan in Netherlands than to get a grant. Studiefinancierung and Collegegeldkrediet are two providers of Student Loans in the Netherlands. Students are provided a set amount of money for the whole duration of their program. Collegegeldkrediet provides loans for master's and research programs and is paid after the completion of studies. There are special grants for research studies, too, and they are more merit-based than others.

Cost of Living in Netherlands

Student discounts are available on food, leisure activities, and transport (You can buy a discount card for railway travel). It is advised to divide your funds into three parts, food, and sustenance, rent and accommodation, and leisure and study material respectively.

Most of the students studying abroad live in shared student housing.  The size of such apartments is variable but they can easily accommodate four to five students.  The rent in shared houses typically runs between €300 and €450 a month, depending on three factors, size, location, and furnishing. It may even go up to €800 in Amsterdam and will naturally be lower in the smaller cities.

You may be required to apply for a provisional residence permit, an MVV (Machtiging to Voorlopig Verblijf). Many Dutch universities negotiate with private landlords on behalf of the students. They rent a block of rooms and then sublet them to students thus enabling the students to deal only with the housing office on campus.

The university will probably make the actual application for you, but you are required to supply all the necessary official documents. As well to basic documentation as proof of being enrolled in a course, you will also need to prove that you have €833.22 (~Rs. 63879) a month to support yourself.

Although you can save some amount of money using the student discount, you should still be ready to bear any medical expenses that you might incur. This is very important because medical costs in the Netherlands are well above average. Students from non-EU countries cannot access the Dutch Government's health plan and need to carry medical insurance from their home country.  As mentioned earlier, you can save on transportation and food using student discounts and compensate for probable medical expenditures.

Top Courses to Study in Netherlands

Medicine and HealthCare in Netherlands