Cost of studying in Italy

In the last few years, Italy has emerged as one of the most favourite destination for international students. The reason for such a massive change in the international perception of Italy is the country’s revamped education system, turning it into one of the highest standards in the world; and also the government’s increased spending on academic infrastructure and research. 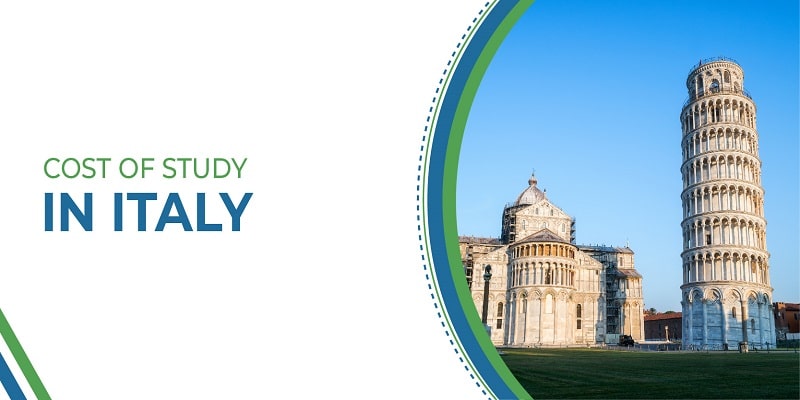 Tuition fees in Italy are surprisingly lower than most other European nations. Institutions that impart higher education usually determine their own tuition fees, but for university education, the government has fixed the upper and lower limits of the fee structure. There is, in fact, a legal minimum cost for enrolment, and a maximum cost for student contributions. This maximum cost cannot exceed twenty percent of the state funding that the university receives. Some specialised degree courses, however, have much higher tuition fees. For doctoral students who receive university grants, there is no requirement to pay any tuition fees. Others without the grant need to pay the tuition fees.

If a student pursues higher education in a public university, he or she may have to pay between 850 and 1000 Euros a year, depending on which university or programme he or she is enrolled in.

For anyone who wants to pursue higher education in Italy, it is natural to look for the best universities. So we present a list of the top universities in Italy, along with the fees they charge:

Italy offers some of the best academic scholarships in the world. Here is a list of the most attractive ones:

Some Italian universities like Bologna University, University of Padova, Politecnico di Milano and Bocconi University offer scholarships for international students. These  scholarships are usually between 5000 and 12000 Euros a year.

Cost of Living in Italy

The overall living costs in Italy are between 1000 and 1500 Euros a month. This estimate includes accommodation, food costs, public transportation, local travel and entertainment-related costs. Of course, Rome is much more expensive than other cities and towns. Given below is a list of student-cities in Italy, with the average monthly cost of living in Italy in these:

Cost of Food in Italy

Buying food from the Italian supermarkets is not expensive. One can easily sustain by spending roughly 150 Euros every month for food. On an average, an Italian lunch or dinner costs between 5 to 12 Euros. However, in mid-range restaurants, pasta dishes cost between 6 and 12 Euros, and fish and meat courses cost between 8 and 16 Euros.

Of course, public transportation is the best means to travel around. A monthly bus, tram or metro ticket costs between 25 and 35 Euros a month. One can also travel by trains, and take advantage of advance bookings that offer discounts up to seventy percent. Railway fares start around 20 Euros a trip, on an average. Additionally, one can also rent a bike for 2.5 Euros a day, or 6 Euros a week.

There will be the weekly costs for phone bills, and other miscellaneous expenses, amounting to 30 or 40 Euros. Also, there will the entertainment-related costs of 30 or 40 Euros a week. To save money, an international student can have inexpensive meals (sandwich, street food, pizza) that cost 2-3 Euros. Some Italian restaurants have the American equivalent of the Happy Hour. One can take opportunity of that as well.

For an international student, therefore, study abroad Italy is the best option, be it for a Masters, or some other post graduate degree. Most of the graduate programmes are in English. This is especially beneficial for Indian Students who want to pursue higher education in Italy.

Top Courses to Study in Italy

Medicine and HealthCare in Italy