Cost of studying in Canada

Canada is slowly becoming one of the top educational destinations among English-speaking countries. While the Cost of Study in Canada can seem quite high for some, they are among the lowest in English speaking countries like the USA, UK or Australia. However, the quality of Canadian education is excellent, with students from Canadian Universities performing very well in the international job market. 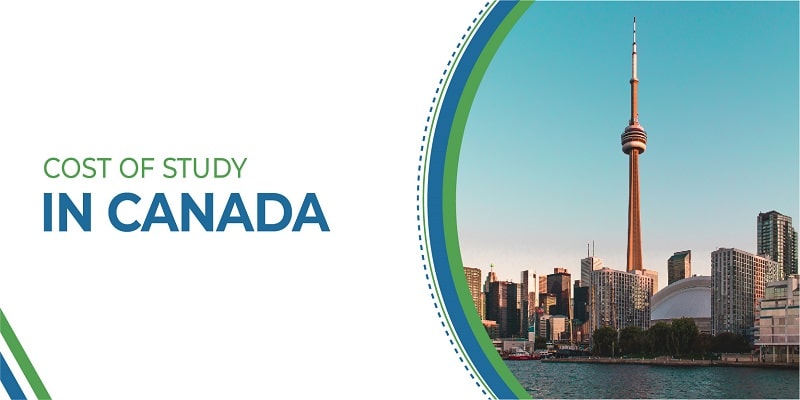 Universities in Canada set their own fees. The fees vary depending on the course, and international students are usually charged more than indigenous students. Undergraduate and cost of study in Canada fees are usually higher, while the fees for Post Graduate programs are lower.

Average Cost of University in Canada:

Public Universities are heavily subsidized by the government, so the fees are lower. The fees at public universities start at around 5000 CAD/year and go up from there.

Private colleges tend to have higher fees as compared to public universities. Depending on the course, the fees for Indian students usually hover somewhere between C$20,000 to C$30,000 per year as the cost of study in Canada, including living expenses. The tuition fees can be partially offset by taking a job.

Student debt is a problem for Indian students who wish to study in Canada. The cost of living in Canada is quite high and combined with heavy fees, students often end up burdened with enormous amounts of debt. However, certain universities have significantly lower fees, ranging from C$5000 to C$11,000. The following list of universities in Canada is among the most affordable for International students to help them lower their cost of study in Canada.

The University of British Columbia charges an average tuition fee of 8,500-9,000 CAD/year,

The Cost of Study in Canada for MS for an international student can be around $16,250 and CAD $28,650 per year depending on the field of study.

Cost of Study in Canada, as per Various Study Fields:

The numbers are annual numbers and in Canadian Dollars. Here is the Cost of Studying abroad in Canada as per various fields of study:

Scholarships for International Students in Canada:

If you are applying through SDS, you will have to invest in a GIC of 10000 CAD. If you are exhausted of all your options with the funds, International Students Loan in Canada is the way to fund your Cost of study in Canada. Most provincial Loans are limited to Canadian students only. So if you are an international student looking to study in Canada and need an education loan, you might have to look for private providers.

For the timelines to prepare documents and apply for education loans, make sure you have a thorough understanding of deadlines and Intakes in Canada.

Education Loans, along with scholarships are the easiest ways to fund your studies while studying abroad because they are meant for students, the repayment is flexible. The amount is high enough to pay for the fees, but the interest rates are lower. There are also some loans that have repayment options after graduation.

​​Cost of living in Canada:

Canadian Visa requirements for Indian students state that they should have at least 10,000 CAD in their accounts, over and above the money required for tuition. However, the cost of living varies according to location. Certain parts of Canada are significantly more expensive than others, with Vancouver maintaining its position as the most expensive Canadian city to live in. Quebec, on the other hand, has significantly lower prices.

Accommodation in Canada for International Students:

Again, the food and transportation costs in Canada will depend on how one chooses to eat and travel. A large number of students choose to cook for themselves rather than eating out as it is one of the most affordable and healthier ways to go by. The monthly groceries will cost you CAD 200 to 400 depending on your location and preferences. For the lazy Sundays and days when you do not want to cook, lunch or dinner will cost you around 18 to 25 Canadian Dollars.

Depending on the city or town you are in, the transportation and monthly plans vary as given below. Here is all you need to know:

Other Costs that come with Studying in Canada:

There are also some essentials and maintenance costs that one cannot simply live without. Be it Electricity, water, Garbage, etc. The ever essential mobile and internet charges can be around CAD $50 to $70.

The visa cost for international students is CAD $150. For Student Visa for Canada, this is the application fees a student will have to pay

Also, keep in mind that international students have to show the funds of around CAD $10,000 apart from their tuition fees as their funds to prove that they can sustain themselves for one year of stay.

Cost of Study in Canada for Indian Students The Study in Canada cost in rupees is fixed amount in a bank account as far as the student visa is concerned. The requirement, as we have mentioned is CAD 10000, which, at the rate of 53 INR for 1 CAD, converts to 530000. However, with tuition fees and other expenses, students are usually advised to have at least 10,00,000 to 12,00,000 INR. Coming to the Canadian Student Visa Fees in Indian Rupees, the amount is around 8000 INR.

Top Courses to Study in Canada

Medicine and HealthCare in Canada